Created 5-Apr-20
26 photos
Shaman's Story
I have a tale to tell about a blue eyed "painted" mustang. In Native American culture, the Medicine Hat pinto is considered good medicine. One with two blue eyes is considered extra good medicine, and considered great enough to carry Chiefs safely in battle. Shaman is a tri-colored Medicine Hat bay pinto with two blue eyes, a chest shield almost resembling an eagle with outstretched wings, and other color spots- on his cheek under his eye on his right side- some suggest looks to be a feather, and on his left flank, appears to be an angel. Above his tail, two human profiles. I had a dream Two actually. Funny, but most dreams I have of mustangs, Shaman seems to be in them. I very much like Shaman, but my favorites are the black mustangs like Voodoo, Knighthawk, Tornado, and Reno, and it's been somewhat surprising to me that in most of them stars this painted blue-eyed stallion. There are two distinct dreams that stand out in my mind which I wanted to share, both of which I have told close mustang friends of mine because they were a bit different. A couple years ago, I had one of those oddball dreams that made no sense, but the feeling was powerful in a happy way... Sounds silly, but it was Shaman nearby chasing a red ball happily in the sun like an overgrown puppy. The feeling was carefree and so happy, and the range was at peace with no gathers since 2009. The second dream that stands out for me- remembering details was this spring before we even knew about the April bait-gather- I remember walking in a dense forest, and it was rather dark, but excited to spot Shaman near it's edge as the sun was getting ready to set and as he ran, I wanted to capture the sun through his flowing mane. He ran hard and fast, at first I thought I may have startled him, but no, had a different sense... it got darker and I felt a concern or foreboding in my heart, and sensing fear or danger in the growing darkness. I couldn't discern if something was after me or after Shaman.. but quickly realized my fear was for the Medicine Hat mustang. I told my friends about this dream and brushed it off until now. It wasn't until well after his return to the range, that I thought of that dream as well as the first one with a complete different feeling. Interesting I thought, and not that it meant anything, but interesting enough to share with you guys, since I'm sharing about this Medicine Hat mustang. Shaman was caught in a bait-trap gather in April along with one of his fillies, Tinder, while the rest of his family avoided it-- his lead mare Granite, and their Lieutenant stallion Commander and three other of Granite's fillies, stayed out of the trap. The contractor was not aware of the family band structures of the mustangs, it just happened this way... and it is what it is. I learned of Shaman's capture and fretted, and unwilling to bring it up until I had more information, and I was confident to believe that he would likely be chosen to be returned outside of the contracted/excess numbers of horses caught. I was hoping hard anyway. It was a nail-biter for sure among us photographers, but how elated we were to learn of his return. I felt it an honor and privilege with other friends, to be part of witnessing his return to freedom. Shaman is currently finding his way on the range. Commander is an impenetrable force, but we will watch Shaman along his journey... along his own mustang trail. Here's my 3 minute video where I had a chance to observe the release, you'll see Shaman along with other horses released over the capture quota.. https://www.youtube.com/watch?v=RK-n4KJI62I
Update: Fall 2019, he was seen with young mare Joselyn, her brand new foal, along with two colts from her natal band. We'll see spring 2020 if Shaman was able to keep his "insta-family". Check back, I will keep adding other images from other trips to his album. 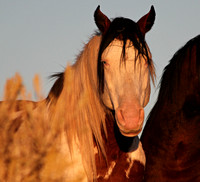 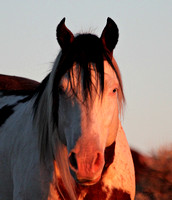