Created 23-Apr-15
73 photos
JOURNAL, March 2015, SE Oregon
We hit four Herd Management Areas in four days. We went to Palomino Butte, Riddle Mt., Kiger, and South Steens. We even saw some horses on a hilltop of Sheepshead/Heath Creek, which is adjacent.. across a gravel road from Riddle Mt. HMA. Myself, Ginger Harter, Carolyn Edson, Patti Braxling Smith, John Wheland, and Terry Smith were in the deep SE photographing wild mustangs.

Ginger and I got to Palomino Butte in the late afternoon, and photographed now famous little near white stud colt, known as Pallaton, his mother was looking a little uncomfortable in her skin, as she was just days from foaling. Traveling farther south on the HMA, we spotted a fairly good sized band of mostly duns, chestnuts, and palominos. We hiked a half mile, using tall sagebrush, and a berm which on the otherside is a waterhole and where this band was congregating. Our confidence and energy was too high... one sighting of us by one big stud and a snort, and they hightailed it out almost faster than we can shoot our cameras. Hiking back to the truck, three sets of coyotes sang their desert tune, one pack of which was rather close. We met up with Terry W Smith and Patti Braxling Smith.

The following day, Ginger, Carolyn, and I at almost daybreak, climbed into my Dodge and headed to meet Terry and Patti at the Riddle Mt HMA, a herd management area we've never been to. We were warned that it's one of the more difficult entry points of an HMA to access with harsh, narrow, and very rocky roads up sides of rim ridges. This was my new truck's maiden voyage backroading it on less than managed rutted roads. I had faith in my truck, but the factory-standard, low-ply tires, much less so.

We found Terry in "Silver" headed down a 45degree slope of a steep hill. At first we thought he was just taking it through the sage, but it was an old rutted road. With his new 600mm he was able to get some great shots of the Kigers- a herd of about 60. By the time we got there, the herd blew out of the area. So in "Silver" and "Blackness".. our iron horses, we drove further, finding a smaller herd over a mile out, of about 35-40 Kigers and hoofed it up and over a hill, stealthing it carefully to these wildies, stopping to flick off sageticks every once in a while. The herd area is vast, seemingly desolate and interesting with it's rolling vistas, located on the extreme NE side of the Steens range. We found the horses similar in conformation to the Kigers on the Kiger HMA, but the colors ranged somewhat more, finding more varying colors like deep solid blacks, deep brown/chocolates, pale silvers, and even what appears to be a 'champagne'. We were also treated to big horn sheep, and chukars. On the way out, we spotted dun-colored mustangs on a hilltop, which is the Sheepshead/Heath Creek HMA. But we were headed for Kiger HMA next and they were far up there.

At Kiger, we found the regular small band near the entry of the Kiger HMA- a very impressive and aloof Spanish stud complete with long mane and a forelock that, if not over his eyes, his long forelock lays in every direction half way down his face. He was in the company of several very young foals, along with his mares and other half-growns. We looked for the large herd of congregated/multiple bands who favor a specific area, but they were not there this trip. So we continued up the road, and found a portion of them in some old weathered junipers. We hoofed it down to this herd, but they didn't stay around long- grabbed a few shots, and we had to hike our way back out of the basin. The hike down was much easier. LOL The herds were much harder to find this time, and skittish. On the way out of the Kiger HMA, we stopped once again in the optimal afternoon light to get last photos of the proud and aloof stallion and his little band once more. We closed out each day on this trip, with great friends, consisting mostly of 'stang talk, sharing photos on the laptop, along with much fun, good food, spirits, and always gut-busting laughter.

Saturday was a full day on the South Steens HMA, covering much of the backcountry, Lauserica (aka Lost Africa by way of text auto-correct), and Tombstone areas. It began with Ginger and I finding a couple bands fairly easily, near the truck, a band also including Bodacious family... where we spent some time with Chrome, and his sibling and newest family member- little adorable soft pinto filly, Arabella. High up on the road, we looked back west, and found "Silver" shining in the distance and a large herd of several bands on a hilltop higher above. We took more photos, and worked our way to what we believed to be Terry's truck, and back on the SS rd, were intercepted by Carolyn. For fun, jokingly, I asked her if she brought me coffee, and cracked up when she came over with some steamy-hot mustang octane- perfect on this cold morning on the mountainside. We stopped and chatted with a friend of John Wheland's, Joe, who patiently waited for John to photograph some birds. She was very patient and quite a trooper. We left my rig with John's, and hopped into Carolyn's Chevy Silverdo Duramax, and made our way to where Terry was photographing.

High up on that hill were several colorful bands, including Freedom and Takoda, Ranger, Red Vogue, and Ditto bands, with a mix of stallions, (along with roaming/opportunistic bachelors like Juniper,etc) that made for some impressive altercations. I melted when I saw chestnut band stallion, Freedom, at the top of the hill, with his new little clone, colt- Wildfire, just under his chin, watching us carefully, Wildfire with confidence, with his tough dad behind him. Stallion Freedom was named in honor of my late father who passed away this last September. I was pleasantly surprised that someone had named the colt Wildfire, as, curiously, that has been my favorite song (and still is) since a little girl growing up with my dad. It was a beautiful moment to see this great stallion and beautiful foal together, and the meaning this had to me.

Honor was up there as well with his band, and incredibly impressive. I have never seen him turn up his stallion jets, like I watched him on this hilltop, telling Takoda- Freedom's Lt, all about his rules and his "kingly" self and reputation- demonstrating what it's like to be "Honor". Impressive is an understatement. When I turned to walk away, my heart melted once more as I watched a newbie walk under his mother's belly and out to peek at me curiously. We got all the shots on the hilltop, and decided to hike back down to the gleaming dots in the distance, as the bands moved down slowly on the other side.

On another rutted road past the snow gage... In "LostAfrica", we spotted some horses to the east, took mental note of their location, but continued down the old road toward a waterhole, planning on getting them on the way back. We spotted a band to our southwest- far out which meant tremendous hiking, but to our luck, as we sat glassing them from the trucks with binocs, just by chance, the band decided to head toward us, covering tremendous amount of ground in a short while, crossing the dirt road in front of us to get to the waterhole- in a run! Unexpectedly, behind us ran in two, 2-3 year olds. But they didn't continue on to join the band, no... they put on a show curiously circling around, snorting at us, getting looks at us from all directions. Apparently we were their only entertainment in a long time way out there and they found us a big curiosity. Eventually they joined the larger band. The larger band, when we made our way to them found much less entertaining and high-tailed it east toward the mountain.


Finished there, we made our way back to where we spotted the other mustangs- several small bands spread out. One of which is Fuego (means 'fire' in Spanish) and he's quickly become one of my many favorites out there- all showy and fiery bay roan. He comes in at full charge. Stops suddenly, snorts suddenly and wheels around, repeating this several times, giving us incredible photo opps. Nose in the air and wild unruly mane flowing everywhere- he carries himself with much grace and authority.

We also, but from great distance, spotted a very interesting colored stallion.. like a muted roan/appy, a stallion Terry Smith had on this list to photograph as he'd seen him only once before, and was extremely elusive and shy. My 300mm did not do this stallion justice, as the heatwaves were harsh, and we were unable to get very close at all. He was and remained about a half mile out.

After LostAfrica, we headed to Tombstone, and found some treasures out there as well. Covering a couple miles of ankle-wriggling lava rock ready to trip over any one any time. We first came across Four Socks new band, who part of which, belonged previously to Domino. Autumn, a lovely and elegant bay mare, had with her a brand new filly, which looked like silver/gray velvet- and will likely shed black. We named her Spring. She napped for a long period of time with us there, but when she discovered us, got up- stretched her long back legs, and nickering softly for her mother- an "awe moment" from all of us. The band stallion, Four Socks, is an aggressive stud you don't want to turn your back on, but on this day, he was very relaxed and barely paid us any attention at all. He was content grazing much of the time we were photographing. We were perfectly happy with that.

The next band we approached was a bachelor group, with a stunning near perfect buttermilk buckskin, but the young stud that was a magnet for my lens, was a jetblack and approximately 3 year old stallion, also known as Reno. I have shots of every angle of the young stud. Twitterpated was I. 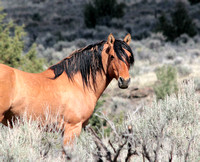 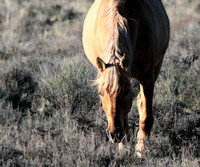 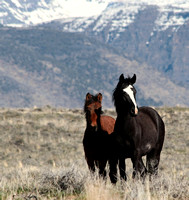 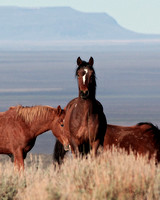