Created 4-May-20
45 photos
Survivor.
A frail pale colt born to aged mare Noelle late season in 2018 has done some growing and healing.
Stallion Merlot swiped Noelle and foal from Cortez and was Survivor's guardian through that first tender year. As of the creation date of this album, he and Noelle have been with a young stallion we know as Muraco.
As a yearling Survivor got a nasty long and startling wide gash across his whole right hip, and again we worried for him. But he's mustang tough and a survivor. Saw him a few days ago, early May, and he's nearly as tall as his mother and his hip wound is very well healed, considering it was approximately 2 inches wide of missing hide and across his hip side. As of summer 2020 he's been running with other young bachelors.

After he was born (September 2018), storms in the high desert started coming in like a freight train, the winter was particularly cold and long, but he grew a thick heavy coat... There were nights when I checked the weather radar for SE Oregon and a number of times it was a nail-biter, wondering how he was doing. We were relieved to see him that March 2019 at the end of winter....

This is the little colt many were concerned about and born around last September to mare Noelle, that Merlot is watching over. If you click it open, you can see how thick and long his lashes are and how they grow down over his baby blues.

Nature sure provided well- giving him extra insulation from the weather with a very thick wavy winter coat. He was little and needed it, the mountain had some doozies of rain and snow storms this winter. the kiddo is a survivor- so happy to find him again. Here's more of that story ...

This trip I was on a mission to find the bitty pale foal many were concerned about after meeting him last September, and wondering how he fared through the rather long harsh winter here in Oregon this year. He was on my list but my expectations were not great bc it's a big area. I had spotted Cortez and the band earlier, which Noelle's from, (in fact was Cortez's lead mare for years until Merlot showed up). While we saw Cortez, but no Merlot & Noelle with the kiddo, but which jives with what we were seeing late last year - they would be with the band off and on, but spending more time away. We figured he'd find a way to finally extract Noelle and take her farther and farther away, so she would not return to her familiar band. Merlot's a smart stallion. The less horses that aged mare and more fragile foal, the better, as the colt grows stronger with age.

I was taking the last few steps to clear a steep hilltop, saw a palomino in the distance on alert from his neck up, and looking back at me from between the sagebrush- not realizing it was Merlot yet- I mean that would be too perfect right - to by chance find what we're looking for on miles of sagebrush and obscuring hills and draws. No way I could be that lucky.

But after some scrutinizing this stallion in those winter woolies which made him look more "yellow", but the long thick winter coats tend to change their color a a bit, some more than others. As I got closer and saw the rest of him and his mannerisms- when the realization hit me... after all these days, hours, and miles, we found Merlot... which only meant Noelle and the tiny pale colt would be near- or hopefully anyway... I could feel my elation build. Climbed a little further up to see more area behind the stallion.... sure enough saw a fuzzy bright white snowball between the sagebrush with his momma standing near. What sheer luck and excitement to finally see him since September and doing rather well- and even bigger a stronger looking! So happy to know too that they're through the worst of the season- nature sure provided him what he needed, and that's an ample extra thick winter coat to protect him and insulate him from the harsh weather elements.

He's with us- he beat the odds, this little Steens gem. He's mustang-tough and a survivor.

His dam, Noelle, is an aged mare (1997) and is declining for no other reason, than her time is near. She's quite low in weight, and I hope she'll make it through the next few weeks. There are new green grasses that have been up since the rains began in the late fall and more plentiful, and plenty of water, but I suspect we're witnessing the cycle of life, as difficult as it is. The winter was hard but the mustangs, while still holding on to their winter coats, are regaining on their winter weight and they're all doing well outside of a few lactating, aged, or injured horses. My heart goes out to her, as the years of seeing her on the range bringing us some amazing mustangs out there, flashed through my mind as I watched her.

Now if Noelle, his dam, doesn't make it-- the colt will be fine... still small for his age, but as almost 7 month old, he'll make it on his own eating grasses and going to water with others... a rhythm of its own out there that he'll learn too in time. But he and Merlot are buddies, and Merlot patient with his slower ways and is quite protective, so I believe they'll remain together if Noelle passes. As said, he's through the worst of the winter season and it will improve from here, and he'll get along just fine.

There you have it- he started with odds against him... the tiniest, fuzziest, little mustang colt I've ever seen, and can't wait to continue on his journey ... but a word of caution, he tends to make melty hearts.

Follow along those mustang trails and journeys with me on my video channel www.youtube.com/mustangmeg 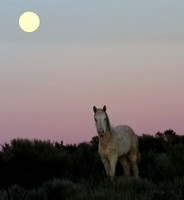 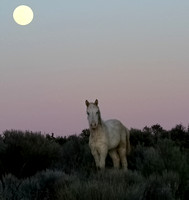