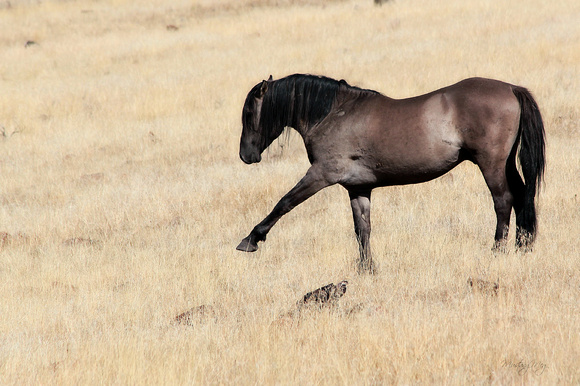 One of my favorite stallions in the Kiger HMA. He's a grullo in color, and has a distinct silver sheen in the right light and angle, so for my personal documentation I just refer to him as "Silver", though there are very few Kigers who have names for tracking. He has an awesome knot low on his tail, and the end of his tail will drag through the sage.

He's among a nice band, but they reside in cl...ose proximity with multiple bands comprising a herd of anywhere from 30 to about 60+ Kigers. A large herd often seen grazing together in a favorite spot of theirs.
This behavior was interesting. Initially, we thought it was just common pawing, as they do for various reasons. But he did it differently- extending his foreleg out unusually, after he turned his hips to a nearby stallion near the band (right of the frame). Didn't think much of it, until later, he repeated the behavior, and the horses behind him moved. In this large herd, this stallion may have developed a unique communication tool- a signal to the other horses, which apparently got results. We weren't there long enough to crack this code, but noticed it more than once, and figure that in larger numbers of horses of multiple bands who run together long term, more refined communication tools are expressed. I cannot confirm yet what it means, but he gets the other Kigers' attention.
He is one impressive stud.
Will watch for this in the future visits with him.
© Mustang Wild
Powered by ZENFOLIO User Agreement
Cancel
Continue