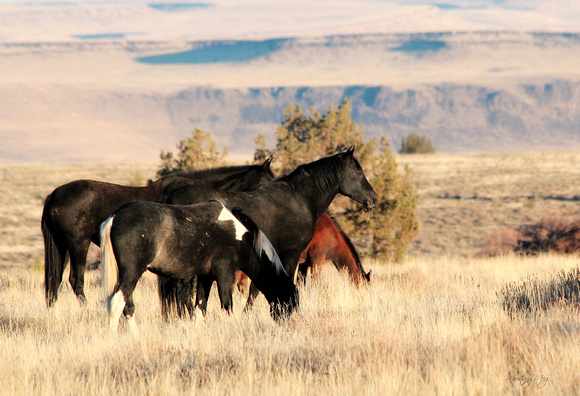 Casper's band of mares which he ended up over time and much trial and error, thieving them out of Jack's band. The dark mares are all related, along with their offspring, and when he swiped one, the family string went with, like an instant family.
For months, these mares would eventually find their way back to the original band, for Casper to repeat the process of moving them away from Jack and th...e band they were used to. May 2014 the two bands were grazing relatively near eachother, something spooked Casper's band, and they all went running for Jack and his band. Casper saw this and intercepted the mares and headed them off and away by snaking them to a hill across the way.
They have finally acclimated and comfortable being with Casper as a smaller band, away from Jack. Time tells the best stories.
© Mustang Wild
Powered by ZENFOLIO User Agreement
Cancel
Continue