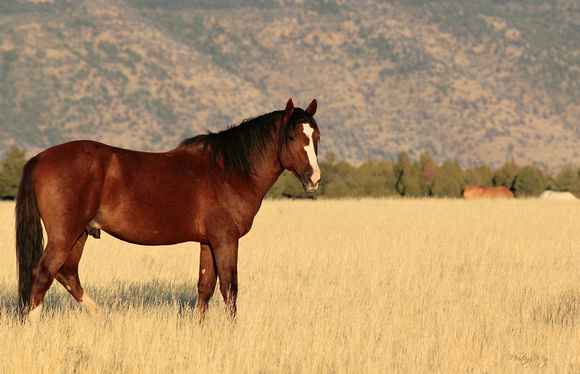 Choctaw
I'm not sure where to begin with this young stallion. He's Cherokee's near clone in conformation and mannerisms. The only thing identifying him as his own self, is his unique blaze. We've watched this boy from a little bay baby, easily lost among a large band of 'painted' mustangs. But he was inquisitive, and his behavior made him stand out to me and I found my camera lens gravitating t...o him. Like a prince he reminded me of his sire, Cherokee, with an air about him that the other horses seemed to acknowledge even at his young age. I was video-taping him sparring with other young stallions in his natal (Cherokee) band, but I noticed something different about how he handled the other stallions- and their immediate responses... that I almost forgot to keep taping... lowering my lens watching him intently. Since then he's been in my heart.

This trip in early October, we noticed a new small band of mustangs... an offshoot of Cherokee mares and youngsters, with a big bay at the helm, along with Cheveyo, the handsome black and white stallion. The bay was most impressive, seemingly in charge. At first we hadn't recognized him, wondering who this mystery stallion was.... and then he turned his face toward me, and his tell-tale blaze gave him away... it was that young bay colt of Cherokee's! This boy has grown up, and grown up big and strong- we were mighty impressed.

Not sure if he's completely split the mares from the big Cherokee band, or if over time they'll merge back as we've seen with Phoenix and Obsidian stallions and their micro bands...
Time tells the best stories.
Meet young stallion, Choctaw.
© Mustang Wild
Powered by ZENFOLIO User Agreement
Cancel
Continue