Created 10-Oct-21
16 photos
A five day trip to the northern region of the Great Basin in SE Oregon yielded a mere 825 photos and videos from my usual 2K+, but some memorable experiences no doubt.
This trip was more sight seeing bringing the husbands with us, where they mountain biked up the summit and down the other side, a bucket list item for the boys. We spent much time sightseeing, but wild horses often dragged me and Alice away... when the guys were distracted by their iron nags, we roamed wild looking for slick and wild mustangs. The fall colors were amazing. Grasses were crunchy but some fall rains were in the forecast for the area to freshen grasses up. Water was both bad and good depending on run-off and pooling from underground aquafers- some waterholes were clearly better than others. The typical were below avg, the shallow holes dry (those are only filled by substantial rains) and then there are those waterholes situated between hills in deep draws that seem to collect the snow melt very well and bc they are deep tend to retain it better for longer periods of time. But it is dry, though the horses look good over all, some even portly. One mare in the Chrome band looked to be having issues however and underweight going into winter.

We saw the Yellowboy band, Cruiser, Wovoka, Aztec, Cortez, Noah, Maestro, Little Vogue, Audacious, Nevada, and Wicasa, but there were more I'll likely remember later. The main stories, as many of you already know is we found beautiful Granite deceased, with no obvious external injury, and we were still working on that, including the help offered by vets from all over asking for images to help riddle this- I am touched by so many offering their expertise. I wont go into detail here, as I've already shared about it.

The other situation was finding Sunshine separated from her foal Pinyon and 2019 filly and stallion (Audacious band). Here’s a vid documenting it, see the October 2021 video on my YouTube channel www.mustangjourney.com . There are also areas of private property and some fencing and just an unfortunate circumstance that they happened to get separated. We contacted Oregon BLM to get permission to temporarily open some gates and hopefully usher her or her band through. It was an all afternoon effort and several miles of meandering the sage trying to funnel them to an gate, but ended up successful, reuniting mare and colt and the rest. Poor Pinyon was so thirsty we have him on images trying to nurse from others. The interesting thing is when we arrived and discovered Sunshine on the other side, she walked confidently to us and stood there as if she was waiting…. and did so four different times as if she was hoping we could help... no shy mustang here- she wanted back with her baby.

We worked so many times to walking them to the gate by a cattle guard, but we had the complication of another couple stallions hearing her calls running in and causing all kinds of problems- at one point one stallion almost sent Pinyon through the fence to his mother. We tried separating the bands and sending the other stallions on their way with their mares, but that made Sunshine's band want to follow them as apparently the three bands were traveling together and what do horses do when they're confused... band together. Ok- so instead worked with all of that and figured it would be slow going... a step forward and two steps back... Strangely mare Sunshine just before we got her to the opening, double-backed and ran up the hill a few times. Finally, we realized she must have gotten through a different spot, so we followed her over a mile and a half, and found another closed gate. We opened it up and maneuvered her and the bands several times... and then finally- she stepped through and was reunited with her band and baby. Pinyon nursed for a long time.
Alice and I from different spots whooped and hollered and can hear that echo back against the rimrock, making us sound like a couple-a coyotes. I'm not sure, but I think there was a little moisture in the corner of my eye. So good to see them reunited- especially since it was touch and go with Sunshine and not wintering well going between several stallions .... we were all praying she would hang on to the new spring growth. I think now we all have a soft spot for her <3

Subscribe to my videos (no cost):
www.mustangjourney.com
Keep me roaming wild:
www.roamwildfund.com 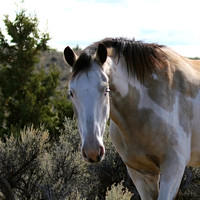