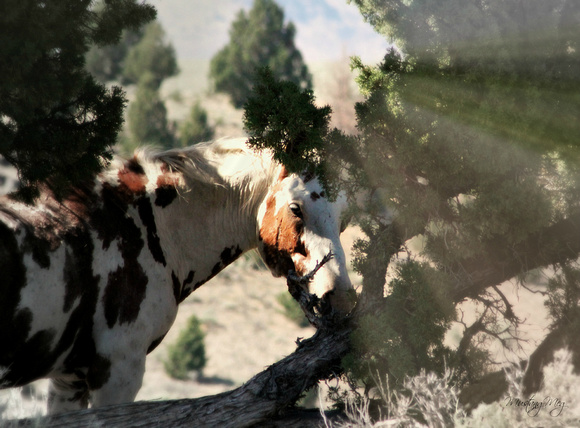 May he fly with the eagles~
When I took this photo, I knew it would be the last time. My eyes welled up a bit, as I told my youngest son his story.
He stood outside of Jack's band, which was unusual to me, in the shade of the juniper. He looked tired. Gratefully, he was in the good company of young bachelor stallion, Benson, who was just recently kicked out of the band. From a respectful distan...ce I spoke to him softly and he kindly paid me his attention.

As I spoke to him, in my mind, moments in time watching this warrior rise to the top on the fast track over the last year through strength and relentless determination, flashed through my head. He earned his name. He was as tenacious as they come.

A warrior, he was.
An underdog, we thought of him the first time we watched his attempts. Much ambition, but up against two powerful stallions overseeing their band. Since early last year, he began earning his name when he decided he would take on Jack and Majesty. Many of us were in agreement that it would not be possible, and I often just shook my head at his stubborn decision to make a mark there. Jack and Majesty attempted to drive him away, and fought with him countless times. However, not once, and no injury deterred his mission. It seemed to only make him stronger. There was a reason in that band that he decided that this was his place.

The band stallion Majesty passed on from his own fighting spirit, and then it was just Spitfire and Jack. Before I knew he had a name, my friends and I referred to him Scarface/Scar because of the permanent gash on his right jaw.... likely, we thought, courtesy of Majesty.

By May 2012, I watched in amazement, when other stallions approached Jack, Spitfire would actually intercept and defend Jack and with such ferociousness. I was impressed. I was pretty sure Jack thought he was earning his keep.

By August of 2012, with Majesty gone (May 2012), Spitfire clearly earned his right as Jack's "Lieutenant"... a job of keeping other opportunistic bachelors away from the harem. My heart cheered silently for this underdog stallion with the crystal blue left eye.

By September 2012, my jaw dropped, when at the waterhole, Jack showed a submissive behavior to Spitfire. I was stunned. Jack and the mares and foals were down at the waterhole, and Spitfire, after a fight with another bachelor, began walking down for a drink. Jack- aware of his approach walked away, pinned his ears... giving this warrior his right of way. That spoke volumes. I have never seen such a turn of events. Spitfire went up in the ranks.

But being a reigning stallion often comes with a lofty price.
In September, we noticed his left eye closed and weeping and we were concerned with blindness. By March, it was evident that he lost his left eye. But he continued effectively to do what he can to defend Jack and their harem.

By April/May through other photographer reports, it was clear an infection had firmly taken hold in Spitfire's eye. But recently, this July, just a few days ago, it was clear the infection, complicated with another wound, was causing him distress and beyond any adequate care.

With heavy heart I have to share that Spitfire was humanely euthanized last Friday, July 12th.

In our hearts, a warrior he will always be.
With eagles he soars.