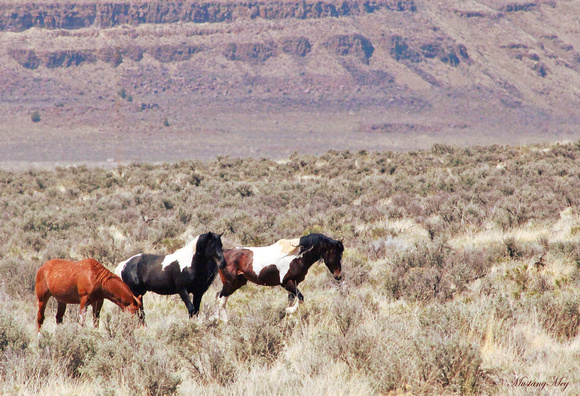 My friends had headed back to the pick up, and me... well, as typical, I have a hard time leaving the herds. I often will turn and look back as I go. This time, I turned back just in time to see the bay pinto, a band stallion- Cortez, run down from his hill top lookout and instantly morph into a heat-seeking missile right at two innocent by-passing boys.

I stood in amazement, anticipating what I ...thought to be certainly an epic fight, and quickly settled onto my pockets, quiet as a mouse- waiting and watching.

For a long period they demonstrated how beautiful and powerful they are to one another... arched necks, snorting, squealing, striking the dirt with front hooves, mane flying in all directions, and tails sweeping the dry desert air as they swirled around eachother.

But then something changed. As soon as the more dominant- the band stallion Cortez, dropped his head down, the impressive displays stopped. And for about a half hour, I was mesmerized and treated to displays of a great friendship among the three mustangs. They took turns grooming the other's withers, and also standing near showing clear affection by touching a nose against the other's shoulder or neck.
What an unexpected treat.
© Mustang Wild
Powered by ZENFOLIO User Agreement
Cancel
Continue