Created 9-May-15
128 photos
Chasing the sun along mustang trails..
One of those trips difficult to stop thinking about... warm sunshine, full moon, cool breezes, wildflowers, twittering birds, butterflies, raptor nests, good friends, and oh yes, wild mustangs. The sunsets were unusually breathtaking, and we watched the sun set across the vast landscape, until there was no remnant of light left. It was a fast but a fun-filled amazing trip. The trip made even more fun with friends like Alice McCammon, Terry W Smith, Gayle and Jeff Dixson, and even met some new ones like Cheryl Edwards-Henderson.

Usually we work rather hard hiking miles to get to various bands- on our feet sun up to sundown. We hiked, but there were also multiple colorful bands of mustangs congregated in the same area of the range on this trip, making my job very easy. At times difficult, however, trying to determine which action to turn my lens to next. But I wasn't complaining. Just sat among the wildflowers with two of my photo buddies soaking it all in and snapping shots.

Every aspect of observing and photographing wild mustangs is a pleasure. But I must say watching the youngsters, especially the once little uncoordinated long-legged cute and fuzzy colts, grow into remarkable athletic young stallions fighting for their rights to be band stallions... Watching them mature, learn, fight, and ultimately earn their mares and eventually their own foals... and if they're smart, watching their families grow. My heart was focused this trip on a young 'golden silver' stallion... Merlot, a palomino colt of the silver Steens legend, Majesty. Merlot is one of those young studs now. He turns 4 in a few weeks, and he's acquired DarkMoon and her bay colt Eclipse- working hard to keep her to himself, defending her, while acquiring more to his harem.

Cute and almost once cuddly colt Benson, a strawberry roan has really grown into his own. He's turned on his jets, earning respect in a hurry. He's currently in a position of appointing himself as a "lieutenant" stallion to Four Socks, but of course with the intention of being the main band stallion. Four Socks has a different opinion.

Juniper, like Merlot and Benson, is moving and shaking things up quite a bit, as he's almost a five year old and he makes you stop and notice when he's on the move. He's decided to attach himself to Red Vogue, and his mare Saige who has a Red Vogue little red sorrel clone-newbie. Juniper is not taking 'NO' for an answer.

Just a few of the youngsters highlighted which we've grown to love over the years. Their play is less, and their fights are increasingly getting more determined and more effective. I am always impressed when they chose to take on a seasoned and tough band stallion. Band stallions like Honor. But Honor pays no worry. The established 'king of the mountain' Honor- just keeps getting better and better. Just when you don't think it's possible for a stallion to get more impressive- Honor does. He's in top form and expressive- running on all cylinders. His band continues to grow, and he has some cute little foals to top-off the wow factor. You can spot Honor from a distance- even as a silhouette on the skyline keeping those young bachelors at bay.

Of course there are the ‘over-the-top favorites’…. KnightHawk, one of the blackest of black band studs. He’s a shy backcountry stallion and surprised me when I saw him on the skyline. There was no way to get close, however. The direction of the wind was in our favor, but we couldn't stealth it visually as we were crossing open and low sagebrush flat about a half-mile away, and with the sun at our backs, they couldn't catch our scent to determine what we were- predator or not, and just our moving silhouettes to his lead golden palomino mare, WindSong, was too much for her with her newbie and last year’s colt to take chances, and gave away our gp by her anxious behaviors, tossing her head and snorting- alerting every mustang in her visual area. Needless to say, very wild KnightHawk and band quickly moved opposite of where we were coming from covering an impressive amount of ground in a short amount of time. But their nervousness also set off a chain-reaction, and even bands familiar with us two-leggeds and our cameras, became nervous ninnies and moved about, causing us to hike in farther and farther.

We had spied another large herd of congregated bands near a waterhole far out south- mere dots in the distance. We used the area's topography of juniper and hillsides for cover to get close, up and around, and our theory was to come in from above and behind them. We were getting closer, anticipating this large herd as we approached in stealth fashion... we heard no hoof falls, seen no dust, or whinny sounds, or any indication of movement at all.. but when we got over the top above the waterhole where they should have been, they were simply gone- absolutely nowhere in sight- like a wild horse ghost town. We stood on the very spot where they stood not too long before and they simply vanished. Looking for sign on the ground to prove they were there… only saw tiny little miniature dust devils skirting about the light dust layered over the rock and dirt.

... BUT- not all was lost. As we walked closer to the edge overlooking the waterhole, we spotted the backs of a small handful of wild horses still down at the waterhole, and we ducked down in a hurry, easing our way closer for fast camera action. Spotted quickly we were. It was Fuego and his two sorrel mares and foals. He's another favorite of mine in the HMA's outback. Fuego saw us before we got a good look at him, and as is his fashion, he charged up that steep rocky incline like it was nothing- covering much ground fast... hearing the heavy thuds of his big wide hooves on what sounded like hollow ground. He got near the top and his long shaggy mane blew in the random breezes. He's a stunning bay roan stallion with a mane spun of long and unruly silver and gray.... the kind of horse you think of when you think "mustang". He looked at us intently, nostrils flared, assessing each of the three of us. He heard his mares shuffle down behind him and head up and away far below, so he quickly turned and ran back down to them and up on the other side. Seeing Fuego lit a fire in my heart- even better than seeing the whole herd of mustangs.
Satisfied and rather happy, we all turned and headed back to my pickup. I stopped and looked on the ground, and there before me was a lock of long shaggy silver-gray mane.

Chasing the sun... is what we do.... up long before it shows it's warm face-- in search of it and it’s angles on the wild ones, and we travel with it, following it along it’s arc across the sky and long after it settles down below the western horizon, while we follow the stories along that wild mustang trail... 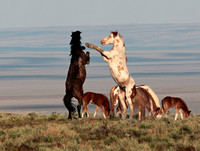 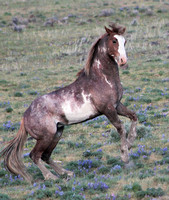 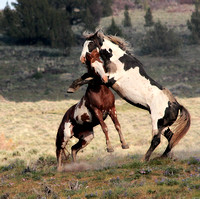 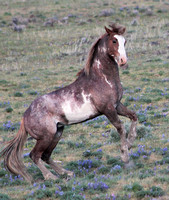 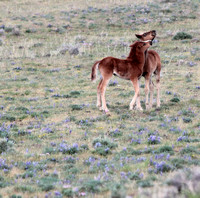 Guestbook for 2015 May
Elena(non-registered)
I follow you on Facebook. I love your photos. They are so captivating. Thank you for posting them. Thank you for being an advocate for these beautiful, wild and majestic animals.
Rosemarie Holguin(non-registered)
I just love your photography it is so breath taking.
Lebanon (KS) Community Library(non-registered)
Love your work and wonder if we could ever have you as a speaker during Cowboy week in April... Love that you are in a sister Lebanon as well.
Dick Wimmer(non-registered)
Are any of these down near South Corral Springs? Used to spend a lot of time there when I lived in Klamath Falls. Lots of them down there.
Regina Patterson(non-registered)
I love reading about the lives of the wild horses. The pictures are so beautiful. Keep up the good work.
The guestbook is empty.
Loading...
Powered by ZENFOLIO User Agreement
Cancel
Continue