Created 19-Jul-13
35 photos
'Go Where the Mustangs Roam'
...was the theme of this trip.
However, that also competed with the often used and chuckled at themed moment, 'Catch that Camera!' when one of my photo buddies stumbled, and my first inclination was to dive and catch her long-lensed camera first, before it hit the lava rock!

In summary, the weather and photo conditions were optimal. Three days of varying weather from cloud/diffused lighting on the first day; storm cells with rain curtains all around the next, and our last day was warm and in the low 70's and puffy white clouds.

The newest addition that we saw was a beautiful dishfaced little cream-colored palomino foal belonging to Charm, so new as there were still signs of his birthday on his tail. We've dubbed him, Chrome.

I had a trigger-finger and have 1,621 new photos and 88 video snippets. This was a highly memorable trip, while they all are, and in their own ways, but this one had so many amazing moments, horses, stories, and behaviors observed, from individual behavior- to band, and intraband dynamics, that I stood in awe with mouth gaping opened, and had no intelligible words that I can form. All I can say is thank goodness for pictures as one picture can say the thousands that went through my mind.

A large number of bachelors are stalking Jack's band as well. He's very busy worrying and defending his sizeble harem, while his offspring, now three year old Benson, is demonstrating maturing stallion behavior around some of the mares and other lurking bachelors hanging near, though still clacks submissively to his sire, Jack. Scar/Spitfire has a new open wound, and we're sure he's lost his eye, and for the first time, since May, has stepped somewhat back, but Jack has picked back up the reins, so to speak.... keeping bachelors at bay, and guarding and getting up newbies, when lagging behind or other stallions near.

Cortez shown gallantly in his intelligent ways of leading and caring for his band- so strong, dynamic, and oozing confidence. His girls and foals are in good hands. Holly, his pretty dun 3 year old, has a lovely black foal with only one tiny sock on the hind leg, born a couple weeks ago, and photographed by other photographers. I have some to share also of that fuzzy black youngling.
What a treat. We were Shaman's paparazzi and there are moments observing him that took our breaths away. But don't want to spill all the beans, so stay in your saddles, and keep walking the mustang trail. 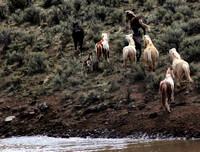 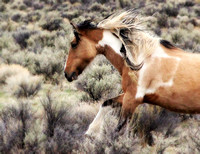 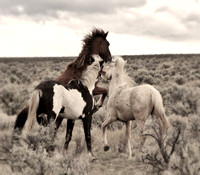 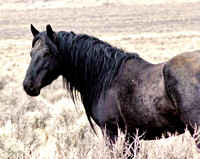 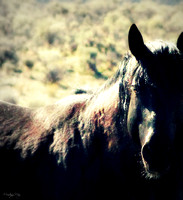 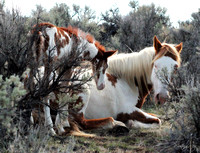 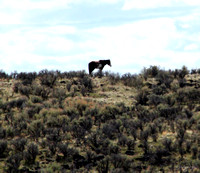