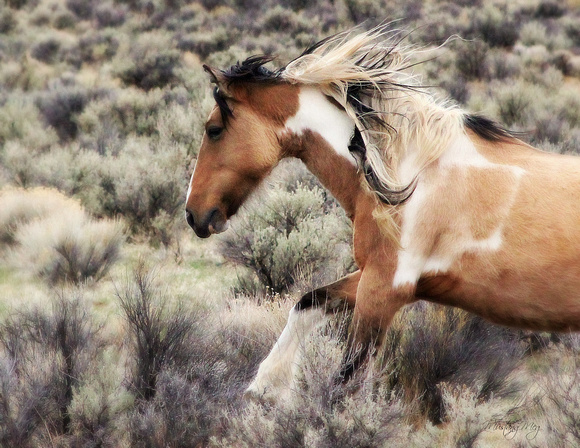 Beautiful Charm (2005-2015)
Mother Bonds~ This was one of the most touching displays of a motherly bond I have seen. Charm was a seasoned mother and was rather familiar with motherhood. Many winters we've worried about her making it through the harsh season, winter 2011-2012 we were sure we would not see her in the spring. But being mustang tough, she always came back, bringing us some breathtaking babies.
The winter prior to this photo, she looked very tired. In March 2013..., we were excited to find she made it through a rather tough winter in not the best of health, but had her foal, likely just a couple days old, as we could still see remnants of afterbirth on his tail. Charming little guy, a very pale palomino, and among our comments we remarked "he's got so much chrome". On that day, we nicknamed her pale newbie, Chrome.

This photo of two years ago- Chrome, though just days old, had found his legs and put them to good use. He zipped around the hillside, giving them a good test drive. Charm was so anxious about his whereabouts, she did not want him to run too far and away or lost from her ... so she ran after him, to keep him near and in her eyesight. She leaped mightily over sagebrush with power and grace... her long tangles of wild two-toned mane flowing to her rhythmic movements.
Since, she's also given us a beautiful red sorrel colt- Topaz, and this March, little filly Arabella. For more information click this link, photo includes her newest filly. Last reports- Arabella is growing and doing well. https://www.facebook.com/mustangmeg1/photos/a.10153103221698956.1073741864.226517823955/10153265229788956/?type=1&theater
Charm will be greatly missed on the mountain.
© Mustang Wild
Powered by ZENFOLIO User Agreement
Cancel
Continue