Created 1-Aug-17
24 photos
Wild Dreams
July 2017 trip- Returned well after midnight driving six hours from the mustang range with 1385 photos - tired from the long drive, but unpacking the truck in the still of the night, my mind roaming the range. And when it was all done, I found it hard to fall asleep, caught somewhere between awake and a dream state for much of the night. Our goal had been to return home early enough to avoid the windy drive through the Cascade mountain range at dark.... but when roaming wild, common sense rarely prevails as planned- real time becomes a hazy after thought.
In this case, about the time we should have left and turn ol' Black for home on the other side of Oregon.... we were sitting at a waterhole when a couple bands came down to water. Sweet, we thought. But not long after, it was band after band after band.... And just when we thought it was the last band and getting ready to pick up our packs and gear, we'd hear a whinny in the distance and the whinny got closer, so we waited, and more bands came down. We saw a whole congregation of family bands and bachelor bands- the whole Hollywood herd and more by chance came down to the very same waterhole we - little ol' us- happened to be at. ... all simply by a wildhair's chance.
We sat under a juniper shade watching colorful wild horses come down the sage-covered hill and splash, play, argue- mustangs of all kinds.. babies, mares, fillies, colts, band stallions, bachelor stallions, even rogue stallions. Watching all their interactions as over the afternoon as they converged on this small waterhole- priceless. Time was meaningless.
The first day, my fourwheel tires hugged steep narrow washboardy road switchbacks and not without fish-tailing occasionally on our way up the steep mountain grade causing gasps and white knuckles on my passengers as we picked our way up the narrow mountain road with sheer vertical cliffs and no such thing as guardrails out in this wilderness. But soon to be rewarded, as at the top, wildfire smoke in the atmosphere gave way to a red painted sun as it set behind colorful cloud striations above the west horizon from the mountain's summit, to watching the full moon rise over the arid barren desert a vertical mile below.... and so began our July range adventure.
We found some bones and fresh cougar tracks in the soft powdery dust between protruding lavarock waiting to be triphazards on a well used mustang highway a ways out from a waterhole. We were well aware we werent alone, and often do a 360 as we hike to see our surroundings. Out here two-leggeds aren't on top of the foodchain, and you are your own hero. Being constantly aware and vigilant is the name of the game when in the middle of nowhere. We did not see the mountain lion, but when scanning the huge caverns and ledges among the rimrock, we were sure that we were on their radar.
Out with us we brought friends who never been out west in the high desert and had never seen mustangs. On our first full day we went to the herd area's outback driving a number of miles rolling over jagged rocks yet again, making me grateful for more than standard 4-ply tires. The rocking and the rolling yielded two mustangs a half mile away, but when they saw us step out of the truck blasted out of there and over a hill, leaving a trail of dust where they just stood.
Many incredible moments, but to name one single moment that stands out in my mind- a moment of pure exhilaration- band stallion Atlas suddenly blasted out of the junipers, boldly demanding who we were. When satisfied, with arched neck and flared nostrils, pranced proudly and effortlessly over the jagged volcanic rock and back to his family.
Sunburned to where my face feels like a furnace, peeling shoulders, bruised toenails, tired feet, and a dusty truck inside and out which I don't recognize..... the proof to myself, that this was not just a wild dream.
July 2017 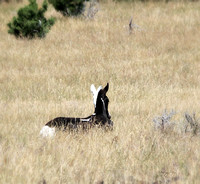 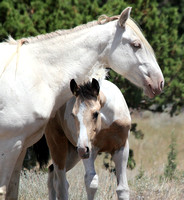 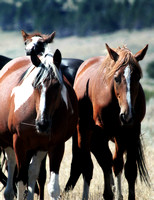 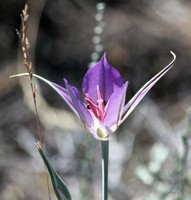 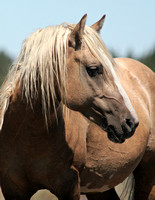 cant donate but will pray to Jesus for help and provision for u.

could u use a free or discounted site upgrade to something that work on mobile devices? let me know...
The guestbook is empty.
Loading...
© Mustang Wild
Powered by ZENFOLIO User Agreement
Cancel
Continue